We made it thirty-six months...

Today my little boy turned three years old! In a few years I won't be able to call him my "little" boy...he is growing up too fast!

Well life is full of surprises. Some surprises are small. Surprises like finding and unexpected $5 in the laundry or maybe turning the corner at the store and seeing someone you haven’t seen in a long time. Other surprises may be a little bigger than that, like when your wife comes to you and says, “I think I may be pregnant”.

We are right in the midst of the larger surprise. Yesterday Allison and I went to the doctor to confirm that, if all goes well, in July of next year Caleb will have a baby brother or sister.

Currently the baby is only the size of a gummy bear, so you won’t be able to make out the beautiful features that are so common with my bloodline. 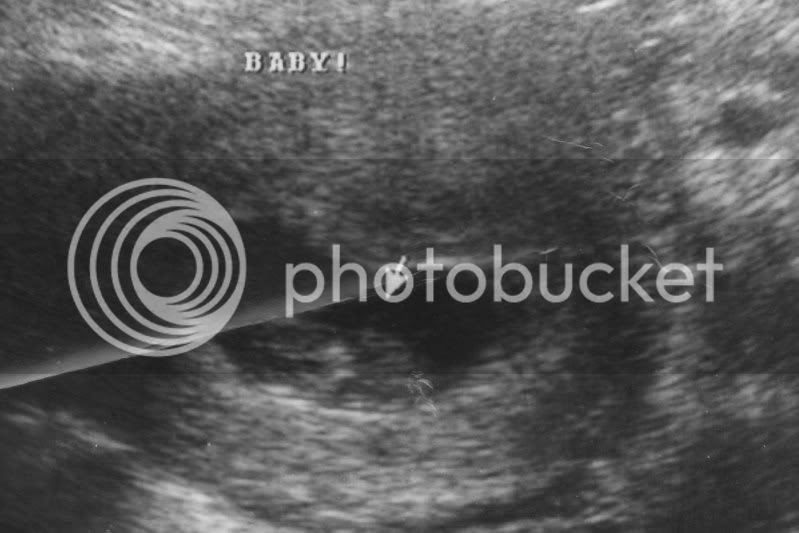 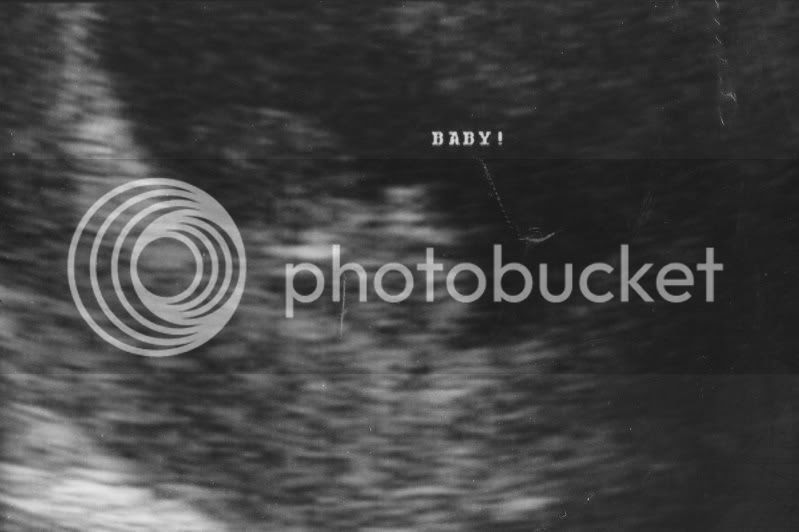 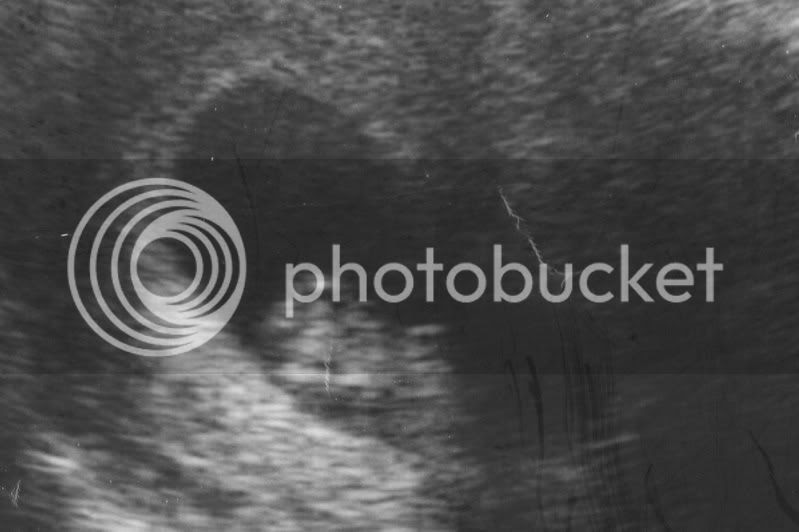 We are still very early, so pray that everything is well for both mommy and Caleb’s future brother/sister.
Posted by SLK at 4:57 PM 1 comment:

We made it thirty-five months...

Caleb came in from "school" wound up like a top. What a perfect opportunity to get his milestone picture made!

This time we thought pj's were perfect for the occasion.

We made it thirty-four months...

We had a pretty busy day and almost didn't get around to doing his monthly picture! Never fear...the picture is here. 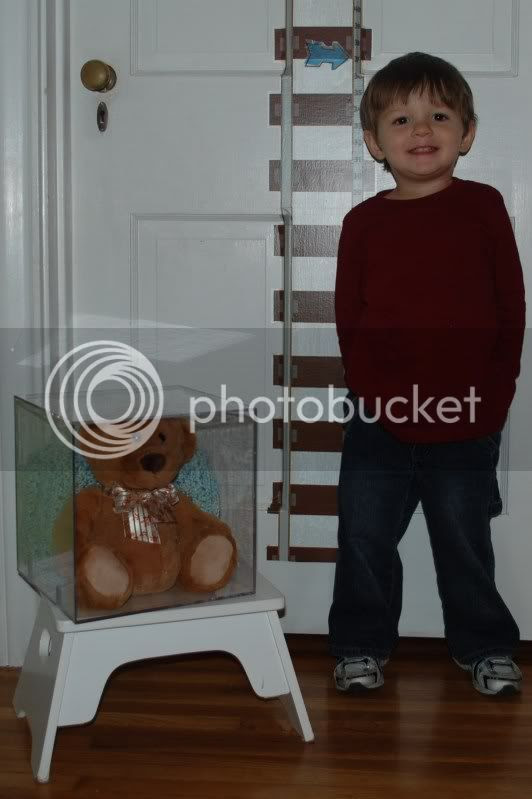 We made it thirty-three months...

This morning was a major whippin' due to some major fit throwing by my precious boy and the subsequent reaction from his father. However, this afternoon my son was a perfect angel for his picture. I guess this is the life during the terrible twos?

We made it thirty-two months...

We have moved the growth chart to the door to make it more permanent in his room. Hopefully it will stay up and not fall down like it did on the other wall. We had to take it down and put it up again month after month. It was had work being this obsessive!

We've been working on the railroad

Today, Caleb and I went to ride the little choo choo train in Fort Worth. Allison had the "opportunity" to go to work, so I took most of the day off and we headed for the tracks.

Caleb getting ready to "ride the rails"...

He really liked to hear the whistle!

He also kept pointing out where the tracks were...

It was slow going, but he eventually warmed up to the train...

After the ride was over, Caleb wasn't too happy to get off the train. He wanted to ride again, but Daddy was ready to get to some air conditioning.

Posted using BlogPress from my iPad

Yesterday we tried out a new church. It is close to "the little house in the hood" and has a private school where we are thinking about sending Caleb. We kept Caleb in "big church" with us and he did very well. There were only a few times that he started to get restless, but nothing major.

After church, we took a mini vacation. We loaded up the car and drove all the way up to Frisco to the most wonderful store in the world...Ikea. After the eight hour drive, we reached mecca.

There was a ton of stuff that I wanted to buy, but Allison has yet to support me in the way I want to be accustomed. So, we only got two items...both of them for Caleb. We got a step-stool and a bag of finger puppets.

This is what the step-stool looked like when we got home.

This is what the stool looked like after about six hours of hard labor!

-Posted using BlogPress from my iPad

Well in an attempt to be more faithful at posting to the blog, I have purchased an app! It is called "blogpress". I don't know if it is going to be any good or if it is going to keep me blogging more frequently. We will use this post as a test.

The picture above is Caleb and his twin Caleb 2.0. We spliced them together one afternoon when we were bored.

-Posted using BlogPress from my iPad

We made it thirty-one months...

You know it is kind of funny how much my little baby is changing. He is really moving into the little boy stage. 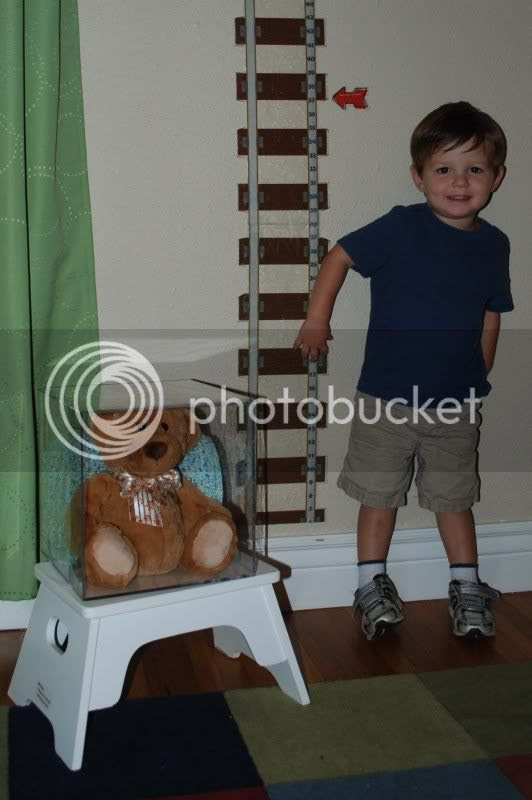 We made it thirty months...

Little Caleb is not so animated as he has been in the past in this months picture. Perhaps it is because we took the picture at 6 o’clock in the morning!!! Oh the commitment that he has to these pictures! It is almost like he has a 6th sense when it comes to remembering when the 28th is upon us. He woke up and virtually demanded that we take his picture. 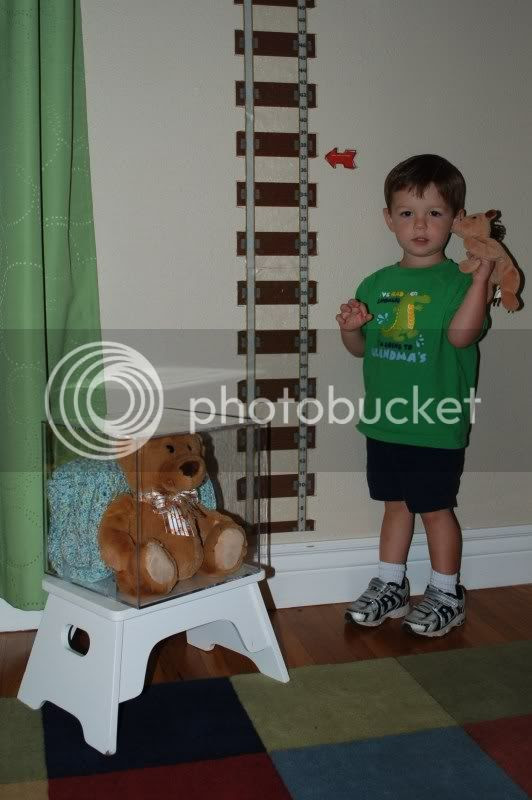 We made it twenty-nine months...

I'm pretty sure that Caleb is throwing some sort of gang signs in this picture. Hopefully they don't mean anything bad. :) 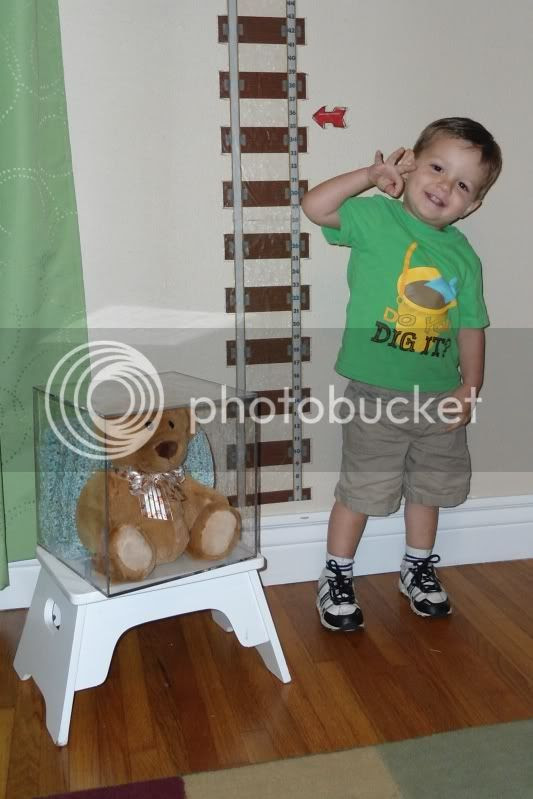 We made it twenty-eight months...

This is only the third "milestone" picture with the growth chart and the poor thing is just not holding up as I would like. We may either have to order a new one or fix it somehow so it doesn't curl.

Who is really looking at the growth chart anyway! Caleb is way too cute to see anything but he. 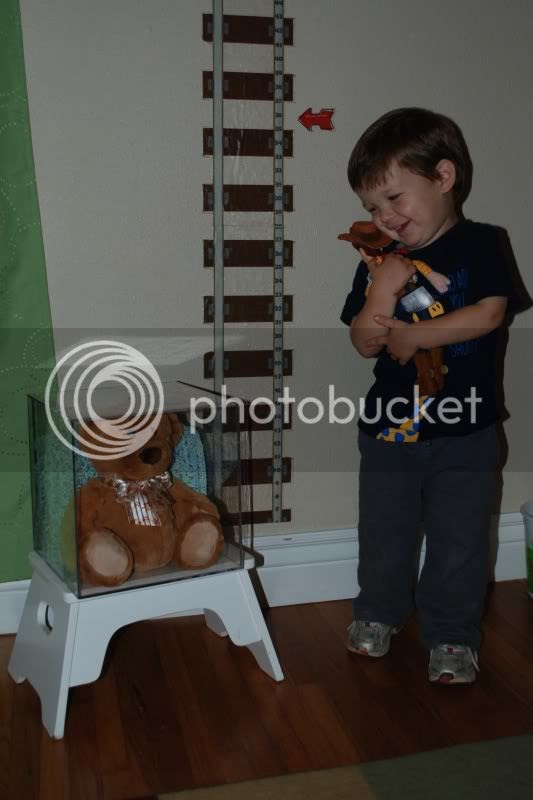 We made it twenty-seven months...

It is not every day that I share Caleb's Milestone picture day! Caleb really wanted to take his picture with his dog. So, Chloe and Caleb are sharing his 27th month milestone picture.

I didn't really notice much growth so we are holding at the 35 inch mark for this month. 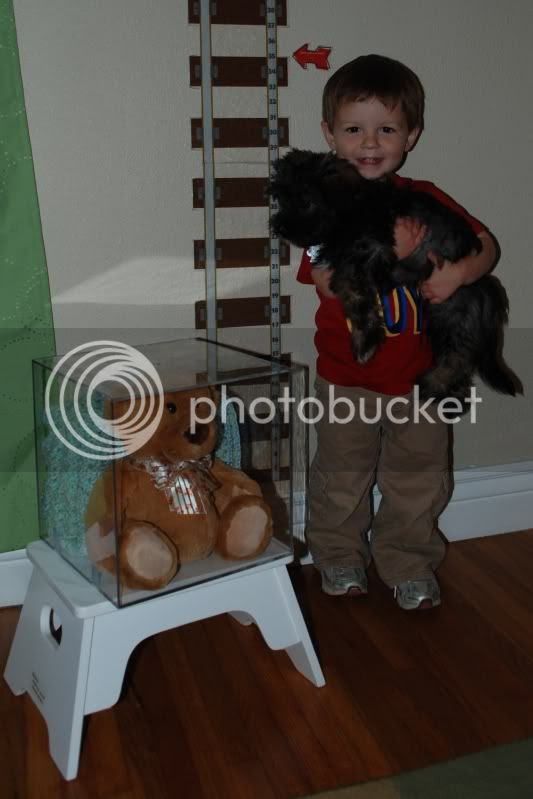 We made it twenty-six months...

Just in case you can't read the growth chart behind Caleb, he is just shy of 35 inches tall. He has grown almost 2 inches since last month!!!! 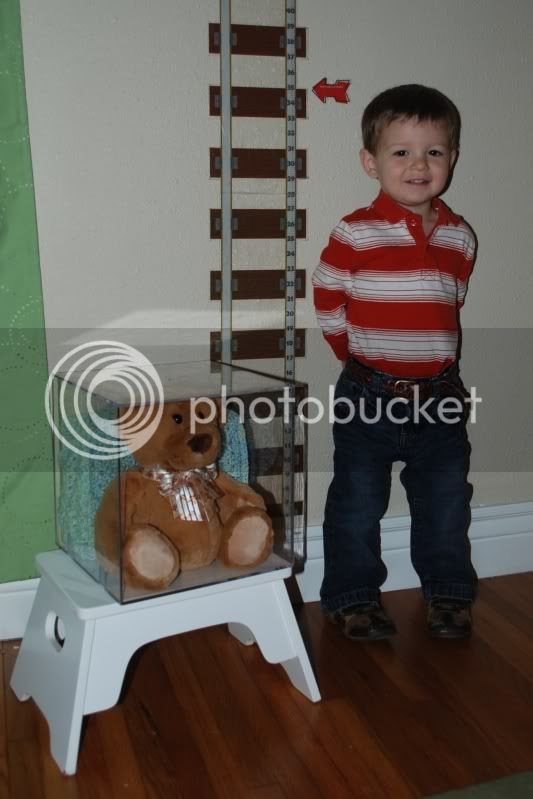 We made it twenty-five months...

Since Caleb is now a big boy, we have decided to do something different with his "Milestone" pictures. Instead of having Caleb sit down in the big chair with the blanket and bear, we thought we would have him stand up with his bear and blanket in their protective box (LOVE that box). This way we get the real picture of how he is changing and growing. We will also start having his growth chart behind him. We may be tweaking this throughout the year, but we’ll see how it turns out. 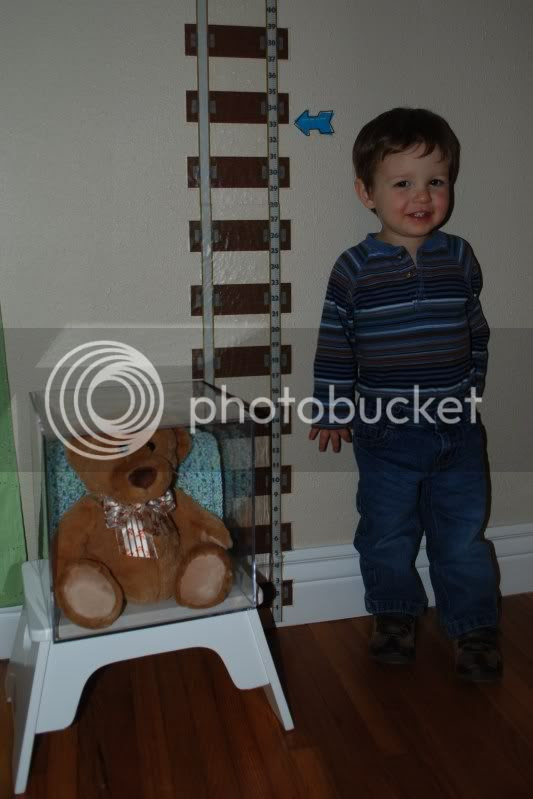 We had a birthday party today to celebrate my son reaching the second anniversary of his birth. Even though it was only his second, and we probably over did it a little bit, everyone seemed to have a good time.

We decorated the dining room (Curious George…that’s his favorite) and gave Caleb the seat of honor. 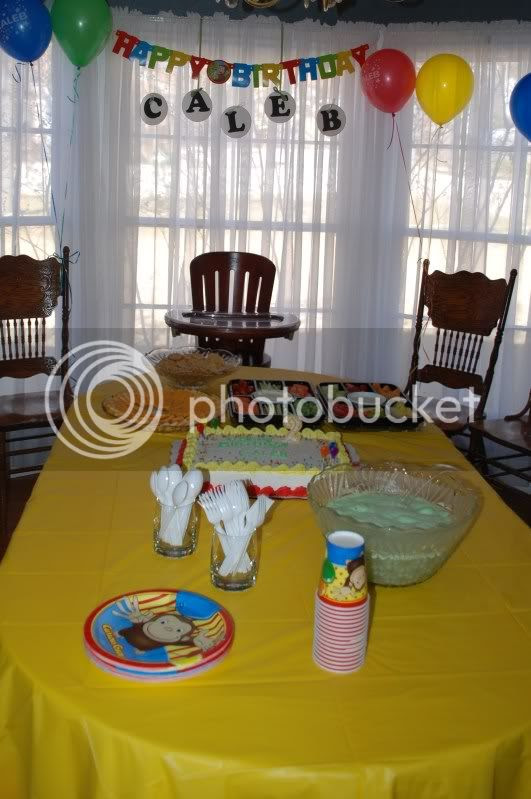 He was a little shy about blowing out the candle, but with mommy’s help, all went well. 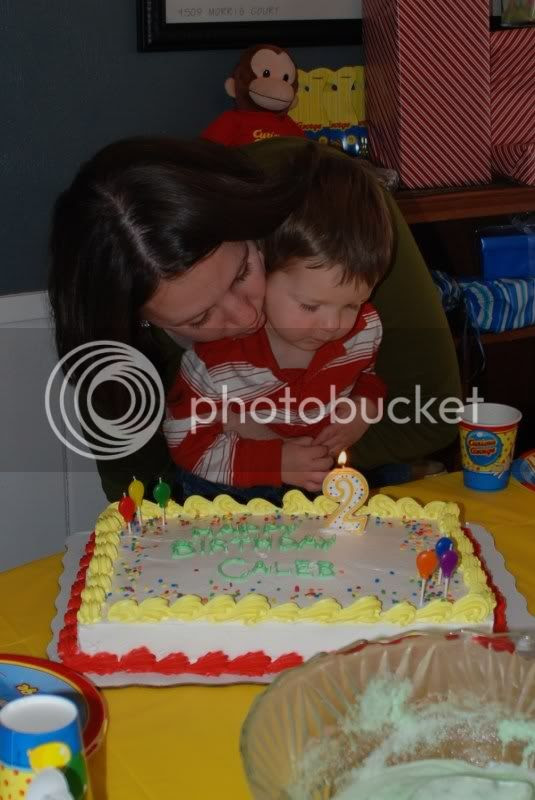 Once Caleb had enjoyed a little sugar in the form of Birthday cake, he was ready to take on the world… 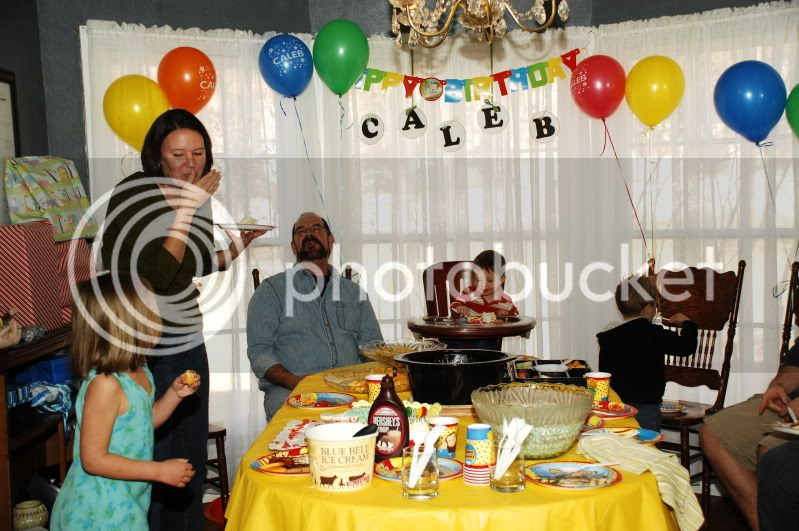 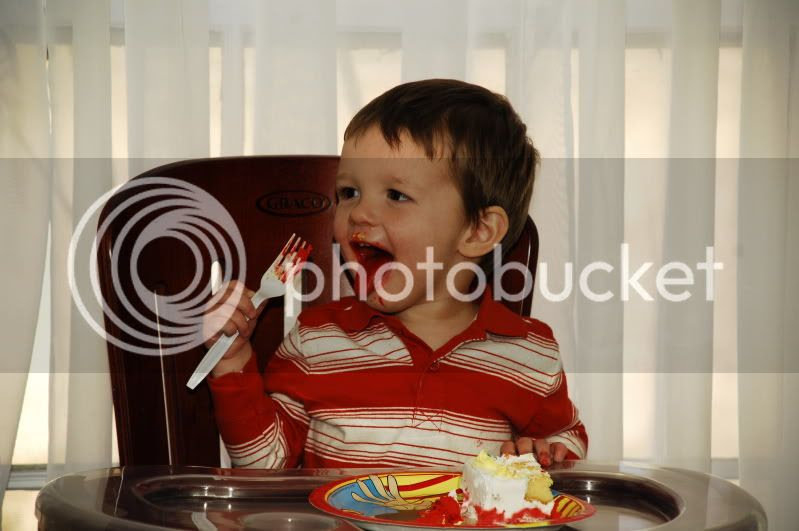 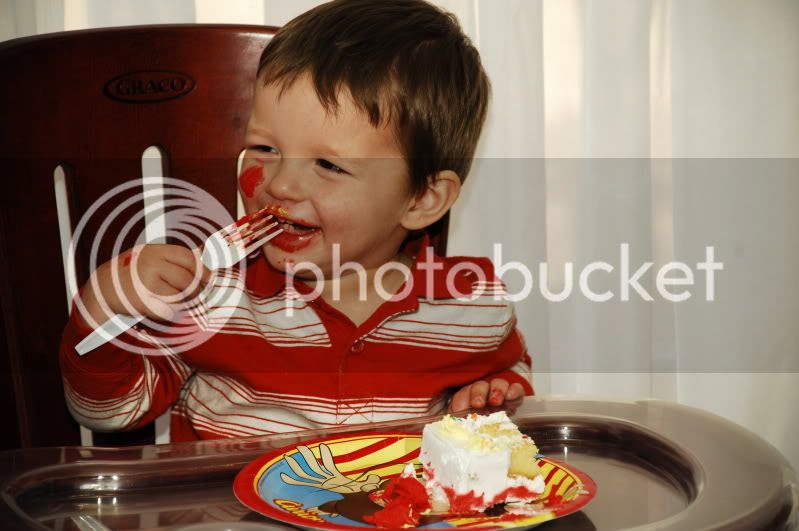 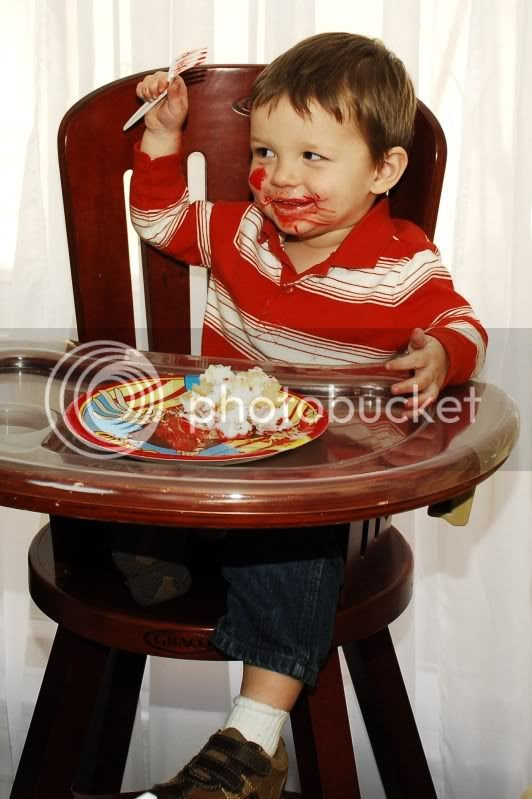 Caleb got too many presents, but I guess that is what being two is all about. He received quite a few of his favorite Schleich animals, a “Toy Story” dinosaur, a Batman coloring book and Batman crayons, a Tonka truck, a set of Play-dough, a farm animal puzzle, a Crayola “glow station”, and the most obnoxiously loud helicopter I have ever heard. 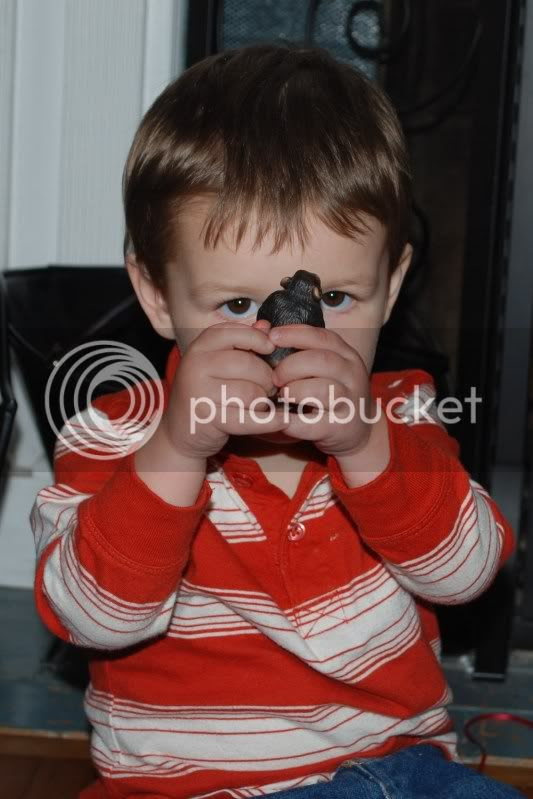 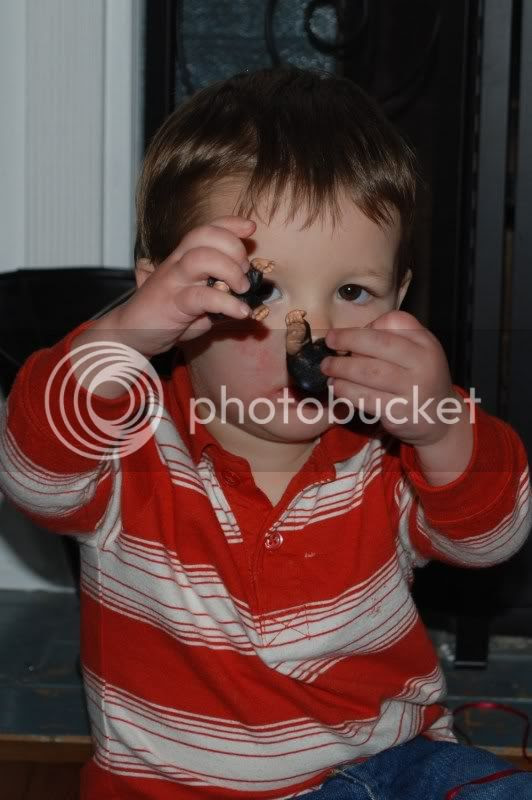 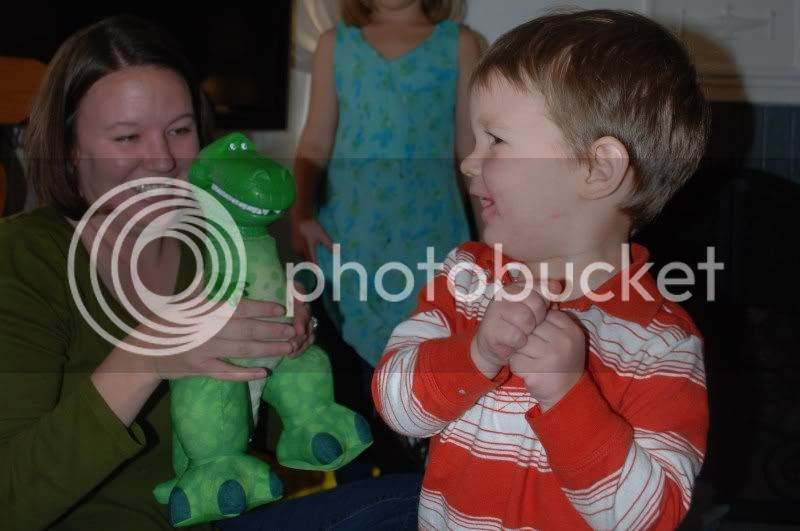 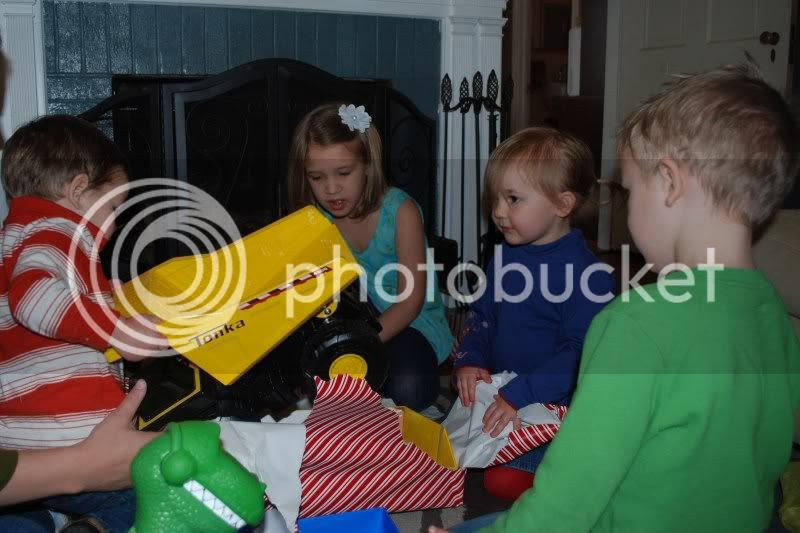 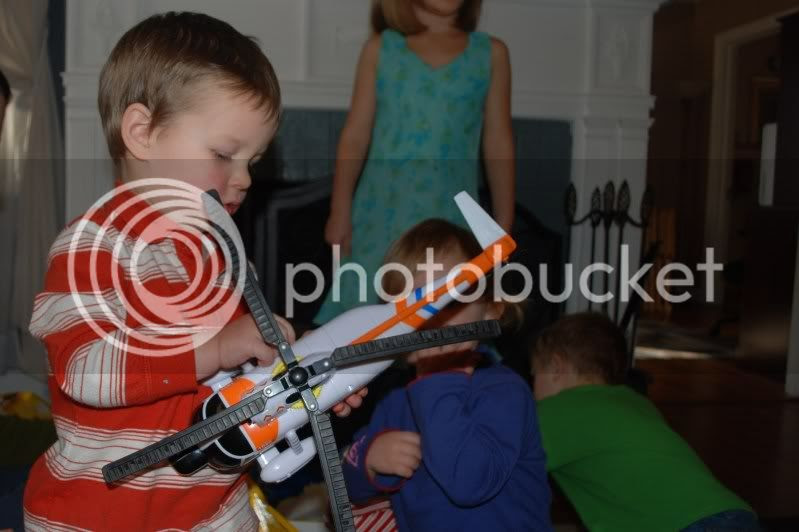 I think "the most difficult gift to open award" would have to go to the gift Caleb’s friends Elle & Stephen gave Caleb. Papaw Travis had to use a pocketknife and blowtorch to get the thing open. Those people at that store really know how to wrap a gift! 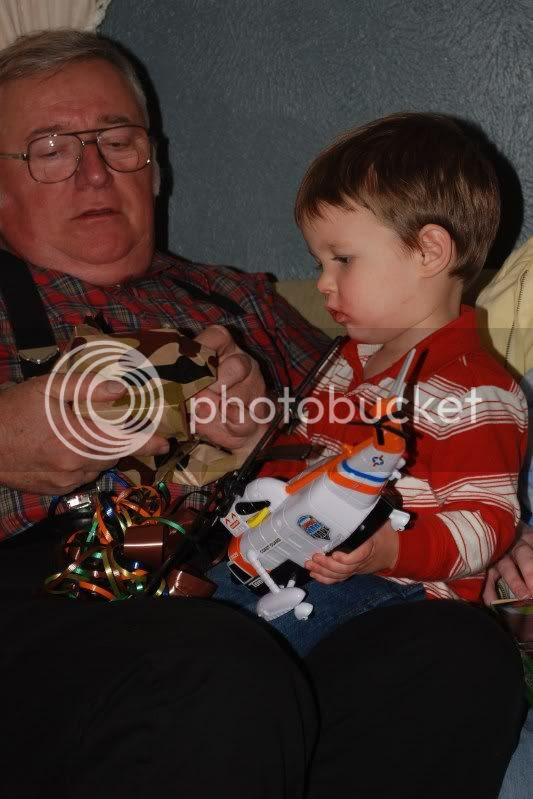 Thanks to everyone that made the party so much fun! 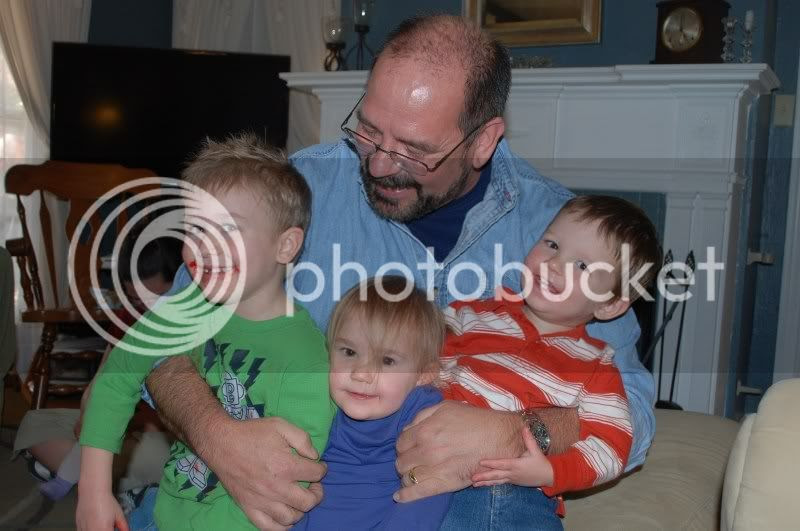 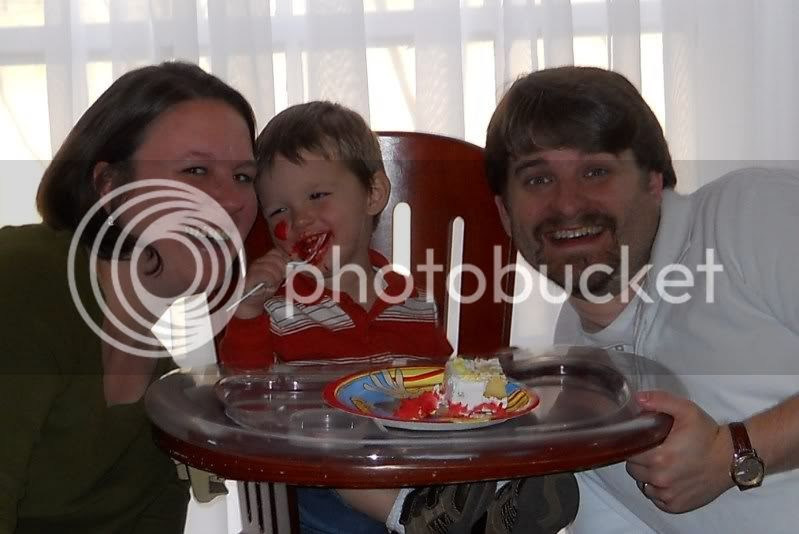